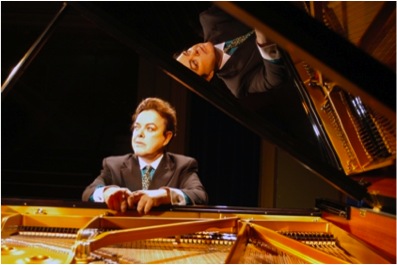 Of Austrian and French-Italian origin, Bruno Leonardo Gelber was born in Argentina to musical parents and was introduced to the piano at the age of three and a half by his mother, who then remained his most important musical influence. Bruno Leonardo Gelber made his first public appearance in Argentina at the age of five and when he was six he began to study with Vincenzo Scaramuzza. A year later Bruno Leonardo Gelber suffered a severe polio attack which completely confined him to bed for more than twelve months. But as music was the most important part of his life his parents had the family piano adjusted so that it could slide above his bed so the young Gelber could continue to practise. By the age of fifteen, having played the Schumann concerto under Lorin Maazel, Bruno Leonardo Gelber had become a household name in South America. At the age of nineteen, he was given a grant by the French government which enabled him to travel to Paris and study. Marguerite Long heard him play there and she declared that he would be her last pupil, but that he would undoubtedly be her finest. Encouraged by Marguerite Long to present himself at her competition, he obtained third place which caused an uproar by the public and press who acclaimed him triumphant.In Europe it was to be the beginning of an immense international career which led Bruno Leonardo Gelber to perform extensively in recital as well as with orchestra…. altogether he has given more than 4600 concerts. Patrons of his early concerts were personalities such as Ernest Ansermet, Rudolph Kempe, George Szell, Joseph Krips, Kyril Kondrachine, Alceo Galliera, Joseph Keilbert, Antal Dorati. Bruno Leonardo Gelber has also played under the direction of conductors such as Ferdinand Leitner, Klaus Tennstedt, Eric Leinsdorf, Kurt Masur, Sergiu Celibidache, Sir Colin Davis, Charles Dutoit, Bernard Haitink, Lorin Maazel, Mstislav Rostropovich, Riccardo Chailly, Christophe Eschenbach, Esa-Pekka Salonen amongst others. He has also performed with renowned orchestras and institutions such as the Berlin Philharmonic, Vienna Musikverein, Tonhalle Zurich, Orchestre de la Suisse Romande, l’Orchestre de Montreal, Philadelphia Orchestra, N.H.K. Tokyo, l’Orpheus Chamber Orchestra, Orchestre de Paris, Orchestre National de France, London Symphony, Philharmonia Orchestra, Royal Philharmonic. He has also performed at La Scala Milan, and at the Salzburg, Granada, Aix-en-Provence, Lucerne and Zurich Festivals. In the United States he has played with Stanford Festival and the New York Philharmonic, Philadelphia and Cleveland Orchestras among others and an appearance at Carnegie Hall was highly acclaimed by the critic Schoenberg. Bruno Leonardo Gelber has toured Australia with huge success and continues to tour extensively. Engagements have led him not only to Europe (Berlin, Paris, Athens, Vienna, London, Germany, Italy…) but as usual in the United States and also in Russia where he played under Vladimir Spivakov conducting his orchestra in Moscow at the Tchaïkovsky Conservatory but also in Saint Petersburg with the Saint Petersburg Philharmonic Orchestra conducted by Yuri Temirkanov. In May 2008, Bruno Leonardo Gelber will tour for 3 weeks in Japan at the occasion of the 40th anniversary of his first tour in this country. Bruno Leonardo Gelber’s recordings, all of which have been universally acclaimed, have won several prestigious awards including the Grand Prix de l’Académie Charles Cros and le Prix de l’Académie de Paris. His recordings for EMI include a remarkable recording of both Brahms Piano Concertos, the Third and Fifth Beethoven Piano Concertos, and a recording of romantic sonatas. The earlier recordings for Denon of the Beethoven Sonatas were recognised by the New York Times as one of the best recordings of 1989. Of the four Beethoven discs currently available, CD Review Magazine wrote … quite simply the finest I have ever heard … I could eulogise about the rest but there is no need; THIS IS A PIANIST IN A MILLION. All in all, four CDs to really listen to and talk about. Transart Live has published the piano concerto N° 3 by Rachmaninov recorded in concert in Lugano and EMI Classics has released in the “Rarissime” collection a box of two CDs including pieces by Beethoven, Schumann, Schubert, Chopin and Liszt recorded a few years ago for the label but also the recordings of both Brahms’ concertos and the concertos N° 3 and N° 5 by Beethoven. He will record a Scarlatti’s recital in the next months for Sony. The prestigious critic of Munich, Kaiser wrote he is a marvel. Arthur Rubinstein considered him one of the greatest pianists of his generation and chose him to participate in a film that François Reichenbach dedicated to Rubinstein. He is one of those artists who teach us more about those works we thought we knew well and who will in the future, we know, continue to teach us yet more. (Clarendon in the Paris’ newspaper Le Figaro). According to the French magazine Diapason, Bruno Leonardo Gelber is one of the hundred greatest pianists of the 20th century. 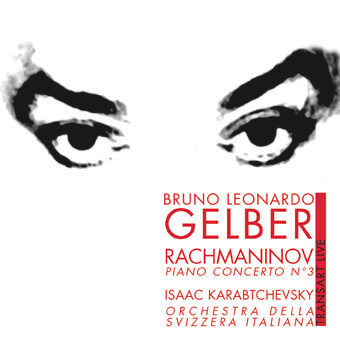