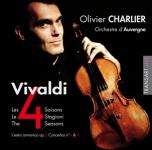 The Strad Magazine recommands the new CD release of Olivier Charlier by Transart Live label
Dans son numéro de juillet 2011, le magazine Strad recommande le nouveau disque Vivaldi d’Olivier Charlier.
Vivaldi : The Four Seasons, L’estro armonico op. 3 no. 6 in A minor & no. 9 in D major. Olivier Charlier (violon) avec Orchestre d’Auvergne. Transart Live TR 157.
“A clear-sighted but thrilling account of some much-recorded music. Olivier Charlier and the Orchestre d’Auvergne play exactly what Vivaldi wrote, and play it extremely well. How’s that for a concise review? At a time when ensembles and soloists seem to vie with one another to over-egg this seasonal pudding, treating Vivaldi’s music as a point of departure of a display of theatrical improvisation, a performance that just does what it says in the score seems dangerously reactionary. But what this superb performance shows is that Vivaldi was quite capable of being colourful and graphic all by himself – he wasn’t an opera composer for nothing. Not that there is any lack of drama in this playing. The summer storms are ferocious, and the tipsy yokels of autumn stagger about alarmingly (the above notwithstanding, the players do take some licence with tempo). But there is much sheer beauty as colour here. Charlier plays with a wonderfully clear, focused sound, his vibrato understated and eloquent, his phrasing exquisite. In full cry he is an exciting player, and if you wish to hear how to spin pure magic out of what seems the simplest of melodies, look no further. He recoreded sound of these live performances is excellent, warm and well-balanced.”
Tim Homfray – The Strad – July 2011

AllMusic.com : Olivier Charlier – wonderful US Review of the 4 Seasons CD
Reviewby James Manheim
“Vivaldi’s Four Seasons violin concertos are perhaps the most famous pieces of classical music in existence, and new versions of them continue to find a market. A performance by a regional French orchestra and a rising French violinist, none of them using historical instruments, might seem to have a hard road ahead to make itself heard, but this little reading is rounded out with a pair of other very common Vivaldi concertos. The disc was recorded live at a festival in Reims that has served as source material for a number of releases on the Transart label, which is oriented toward live recordings. Violinist Olivier Charlier has a fine singing tone and simply plays to his strengths, shifting the emphasis to the slow (and slower) movements and their limpid melodies. The result is that the most enduring and endearing Vivaldi melody of all (track 11) comes out very well indeed here, and in general the strong tempo contrasts work to the benefit of the music’s pictorial scenes. The outer movements contain little that hasn’t been done many times before, and the live engineering is uninspiring. But the lesson is that no matter how familiar the Vivaldi Four Seasons may become as they approach their second half century at the top of the classical heap, there’s still plenty of room for individual musicians to find the places where these concertos fit their particular talents.”
http://www.allmusic.com/album/vivaldi-4-seasons-w267023