Cellist Matt Haimovitz has established himself as one of classical music’s most adventurous artists, equally at ease playing the masterworks for his instrument in solo, chamber and concerto performances in leading concert halls as he is bringing classical music to new listeners in surprising new venues. A teacher, a record label entrepreneur, and a celebrated performer, Haimovitz manifests his love of music not only in the seriousness with which he approaches his work but also with his warm demeanor and the natural expressiveness of his playing. Haimovitz has made headlines with his path-breaking performances of Bach’s 6 Suites for Cello Solo. He struck a nerve in the music world with his unprecedented Bach “Listening-Room” Tour, taking Bach’s beloved cello suites out of the concert hall and performing them in intimate venues across the U.S., Canada, and the U.K., to great acclaim. The tour has been profiled on NPR’s ‘Performance Today’ and PRI’s ‘The World,’ as well as in The New York Times, The New Yorker, The Los Angeles Times, The Chicago Tribune, The Boston Globe, The Seattle Times, and The Philadelphia Inquirer. Haimovitz was the first classical artist to play at New York’s infamous CBGB club, in a performance that was filmed by ABC News for its half-hour feature, “Nightline UpClose.” Since his 1984 debut with the Israel Philharmonic and Zubin Mehta, Haimovitz has performed with such conductors as James Levine, Daniel Barenboim, Semyon Bychkov, Myung-Whun Chung, Charles Dutoit, Sir Neville Marriner, Seiji Ozawa, Giuseppe Sinopoli, Leonard Slatkin, Michael Tilson Thomas, and David Zinman. He has appeared in North America with many of the great symphonies and philharmonics, including Boston, Chicago, Cleveland, Los Angeles, Montreal, New York, Philadelphia, and San Francisco, and internationally with the Berlin Philharmonic, the Orchestre de Paris, the Philharmonia Orchestra of London, the Orchestre de la Suisse Romande, the Radio Orchestras of Frankfurt, Cologne, Leipzig and Hanover, the Israel Philharmonic, the New Japan Philharmonic, the Beijing Opera Orchestra, and many others. Recording is an integral part of Haimovitz’s musical life. His Bach 6 Suites for Cello Solo on Oxingale Records was nominated for an Indie Award by the AFIM and won Just Plain Folks Award for Best Classical Recording. It was chosen as a “Top Pick” by U.S. News & World Report and featured in Billboard, Gramophone, The New Criterion, and other publications. Also nominated for the Indie Award, The Rose Album (Oxingale) features Haimovitz, pianist Itamar Golan and guests performing works by Schubert, Schumann, Chopin, Paganini, and Robert Stern as well David Popper’s Requiem for Three Cellos and Piano. In 2003, Oxingale Records, the label Haimovitz formed with composer Luna Pearl Woolf, signed an exclusive contract with Artemis Records to collaborate on future projects and past releases including Anthem, Hyperstring Trilogy and Lemons Descending. Prior to establishing Oxingale Records, Matt Haimovitz’s ten-year exclusive relationship with the Deutsche Grammophon label (DGG) resulted in six acclaimed recordings. His 1989 debut recording of Saint-Saëns, Bruch and Lalo with James Levine and the Chicago Symphony Orchestra was lauded by Gramophone Magazine as heralding “the arrival of a new star in the cello firmament.” Born in Israel, Haimovitz has been honored with the Avery Fisher Career Grant (1986), the Grand Prix du Disque (1991), the Diapason d’Or (1991), and is the first cellist to receive the prestigious Premio Internazionale “Accademia Musicale Chigiana” (1999). Matt Haimovitz heads the cello program at the University of Massachusetts (Amherst) and frequently teaches master classes during his travels. Haimovitz plays a 1710 Matteo Gofriller cello. 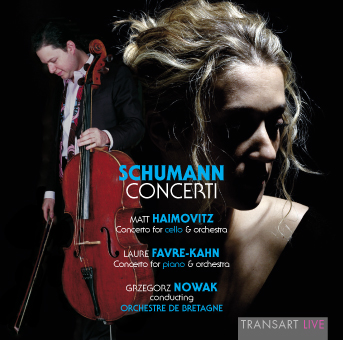