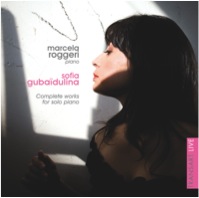 All Music critique le disque Gubaidulina de Marcela Roggeri chez Transart Live.
The piano music of Tatar-Russian composer Sofia Gubaidulina stands somewhat aside from the mainstream of her music, which was heavily influenced by Orthodox spirituality and various musico-mystical devices that flowed from it.
This single-disc collection, however, shows that piano music played an important role in Gubaidulina’s compositional development, and it includes one utterly delightful work.
The album covers Gubaidulina’s entire output for the piano, all of which dates from 1974 or before; the bulk of the music is from the 1960s. With the Bachian inspiration of the Chaconne, Toccata-Troncata, and Invention (tracks 1, 19, and 20), the music reveals the Shostakovich influence that Gubaidulina has spoken of but that is hard to pin down in her explicitly religious music.
The sonata, composed in 1965, uses extended techniques (such as a bamboo-stick glissando executed on the piano’s pegs), rough piano analogues of the unusual instrumental combinations that have characterized much of Gubaidulina’s music, and contains structural embodiments of the Christian cross. Best of all are the 14 Musical Toys, composed in 1969.
These are little descriptive pieces, very Russian, but not quite resembling the music of anybody else. Sample The Little Tit (track 8), where the focus is on the deep quiet of the forest rather than on the slight moments of birdsong. Of course, the set has a large measure of sheer humor — try the jazz-flavored A Bear Playing the Double Bass and the Black Woman (track 9) — and it ought to be much better known than it is. Recitalists: you are guaranteed to get good reviews if you program this work!
At least if you play everything with the flair shown by Argentine pianist Marcela Roggeri in this live recital from Reims, cleanly recorded in 2007. An enjoyable set, and likely a must-have for Gubaidulina’s admirers.
Review by James Manheim